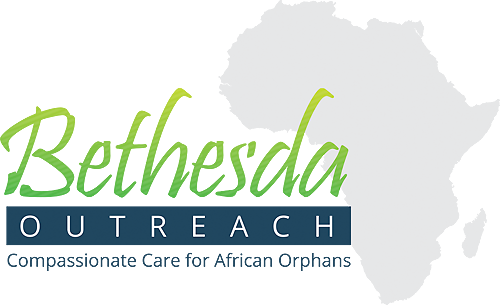 “Religion that God our Father accepts as pure and faultless is this: to look after orphans and widows in their distress and to keep oneself from being polluted by the world.”
—James 1:27
Learn more 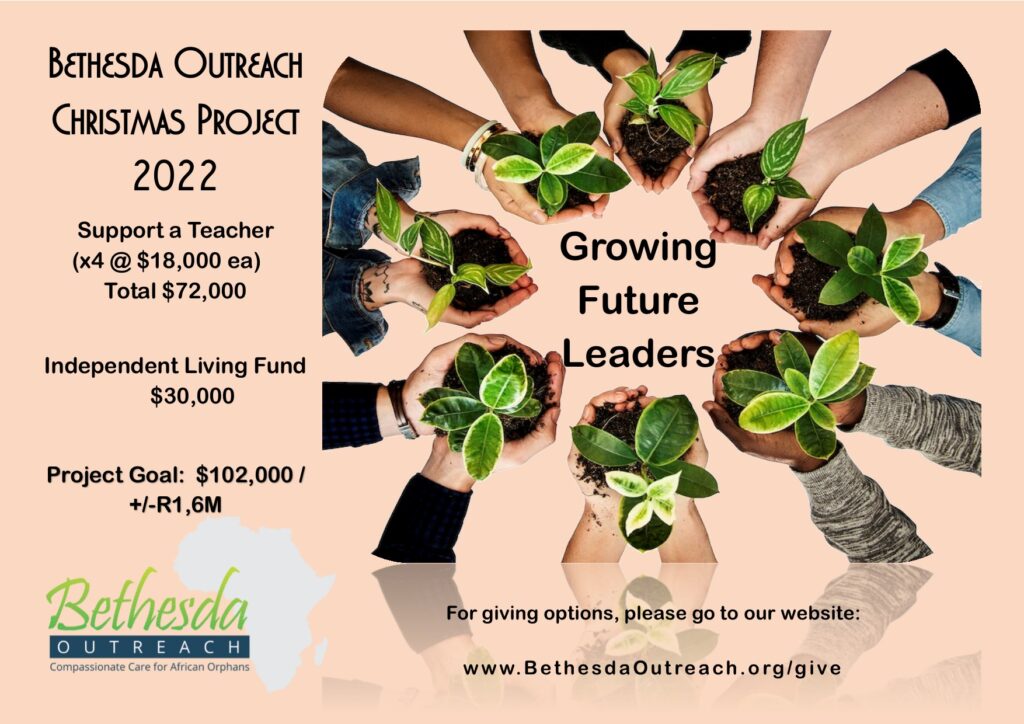 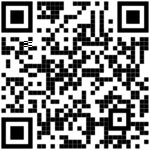 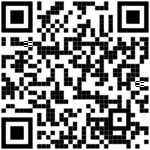 Support a Teacher*   $72,000  (x4 @ $18,000 ea)
The most recent and pressing challenge that Bethesda has faced is the financial stability of Bethesda itself. Bethesda is structured so that JCA school fees helps to cover the costs of childcare. In order to do this, however, the school needs to be profitable. Over the last 5 years, x2 unforeseen events had a major negative impact on the school’s finances.

Firstly, in 2018, the South African Council of Educators (SACE) began refusing to certify foreign missionary teachers as accredited teachers in SA. This directly led to Bethesda losing x4 funded missionary teachers, who had to be replaced with salaried South African teachers. That alone had an impact on our budget of more than R1 million per year or +/-10% of our total budget.

Secondly, the Covid19 pandemic and the lockdowns that went with it, has had an extremely negative effect on the local economy. Due to massive job losses, and the economy that has not recovered sufficiently, many parents were forced to remove their children from JCA, as they can no longer afford the tuition. This year alone we have seen an enrolment shortfall of around 40 students. This alone amounts to another +/-R1 million in lost income to Bethesda this year, meaning that we’ve seen our total budget being negatively affected by roughly +/-20% over the last few years.

Enabling Next Steps / Independent Living Fund    $30,000
This part of the Christmas project is for helping us enable our children who are moving out of high school into a more independent living situation. This fund allows us to help them make individualised plans and wise decisions on further education such as university/skills training, apply for bursaries/scholarships; pay registration fees for study, get their driver’s licences, meet basic food/housing needs while studying, and the like.

Bethesda has x7 children who will be graduating from high school in the next 3 years so these expenses will grow and these costs are not generally considered in the child care grant system. Once the children reach 18, there are very few resources to make these important next steps.

HOW CAN I MAKE A DIFFERENCE?

Serving Christ at Bethesda Outreach is the perfect place to gain some experience in ministry, to fill a gap year, or bring a team of people for a few weeks. Click here to learn more about how your involvement can make a difference in an orphan’s life.

Learn more about our families, children and ministry through our blogs. Click here to view more blog topics and news on the latest events.

The latest from Bethesda

April Child of the Month – A.M.

The April Child of the Month is A but most people call her with a nickname that starts with “N.”  She is very new to Bethesda and only arrived a few months ago with a group of siblings. A is 14 years old and still adjusting to new routines, rules, siblings, parents...
Read More

B is 9 years old and interested in everything. He is also well known for his friendliness. You can usually find him outside playing with his friends, kicking a soccer ball around or finding something interesting to do. He enjoys reading and is doing fairly well in...
Read More

February 2022 Highlights from the Update

It is of immeasurable value for believers to know that our God is sovereign. In times like these when the world is poised on the brink of war and there is so much uncertainty, we should take courage and comfort from God’s sovereign control. We need to actively trust...
Read More

Z is 7 turning 8 this year. He is a typical active boy who is brimming with personality. He loves to play soccer, playing on the playground, helping in the kitchen and working outside in the garden.  He has a great sense of humor which makes people laugh (and may or...
Read More

My name is B. I am one of two girls in my family. I have always enjoyed dramatic arts and have love listening to music and dancing whenever I have the time. I also enjoy baking and have taken some courses in school to learn how to cook/bake even better. I love...
Read More

December Child of the Month – T.M.

T came to Bethesda when he was very young - just a few years old. He bonded quickly with his parents and now he’s one of a group of fun-loving, crazy boys in his home. T is 8 years old and loves to drum. In fact, he will turn almost anything he can find into a drum....
Read More

October Child of the Month – R.M.

My name is R.M. and I have been a part of Bethesda Outreach for the majority of my life. I am so grateful for the family God has given me and the godly upbringing that they have worked to accomplish in my life. Now that I am moving towards the end of my university...
Read More

November Child of the Month – G.M.

My name is G.M. I am in high school and so thankful for my family. They love and care about me and I can always count on them. When I am home, I help in the kitchen by baking and cooking as well as doing some of the cleaning and the dishes as well.  When I have free...
Read More

If you visit Jabulane Christian Academy at Bethesda Outreach, it is normal to hear children’s voices and see them playing on our property with big smiles on their faces. If they are not playing on the jungle gym, then they are throwing a netball or playing soccer so...
Read More

V is a 19 year old young man who enjoys playing soccer as well as cooking (he really likes spaghetti with mince/ground beef). He has grown into a kind and respectful person who tries his best at whatever he does. He helps with the sound system at church and has shown...
Read More

The latest from JCA

(Download the PDF) Parent Teacher Conferences Thank you to all the Parents who made appointments with their children’s teachers and took the time to meet with them.  The teachers were pleased to have the opportunity to discuss your child’s progress with you and...
Read More

Construction of 5 additional classrooms will start soon! We have good news to share with our JCA family.  We have reached our 2020 Christmas Project goal and raised over $200 000 (approximately R3 million)! We have received donations from South Africa as well as from...
Read More

“Every day I will bless you and praise your name forever and ever. Great is the Lord, and greatly to be praised, and His greatness is unsearchable.”   -Psalm 145:2-3 (ESV) A Unique Term 2 Term 2 is drawing to an end, and what a unique one it has been! The term started...
Read More

Dear Parents/Guardians The year 2020 arrived with great anticipation and before we knew it the season changed to autumn and term 1 has come to an end! We hope all 73 new learners and their parents have settled in well into the JCA family. We hope that all our families...
Read More

We would love to hear from you