September Child of the Month – S.B. 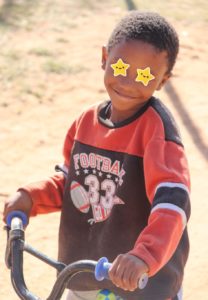 S is the youngest of a sibling group here and we were very excited that he was able to join his sister who had arrived several years earlier. S is in his first year of school and learning a lot! He loves to dance, play and run around. When he’s not outside with his friends, or riding his bike, he enjoys watching kids movies with his family.

His mom says that he is likes to giggle so you can imagine the kinds of jokes he likes to pull on his family. He lets his mom know everything that is happening in the house and frequently imitates what he sees other people doing.

School is not easy for S so he has to work hard but he is usually pretty patient in doing his work. He is working on some areas of developmental growth which will greatly help him in school over the next years. You can pray that he will continue to mature in his responses to correction as well.

He likes to ask for new clothing but he is actually asking because he wants to share them with others. Please pray for S as he grows in his understanding of the Lord and that he will come to know just  how much Jesus loves him.