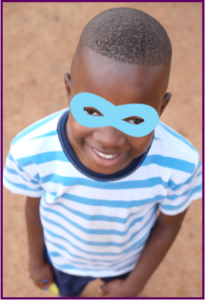 S has been with his Bethesda family for several years and  is going into Grade 2 in January 2018. He is a very happy child who sings the whole time he is doing his chores. When he has some free time, he enjoys playing games or putting together   puzzles. His very favorite activity is to be outside playing with his friends.

He is a very active boy and loves to make people laugh. He often tells jokes and especially tries to get his younger brother to laugh. He is aware of how other people in his family are feeling and tries to explain why they should obey and to encourage them when they get into trouble.

There are times when he responds to correction by getting angry but he normally takes a little time to think about it and comes back to apologize. He is one of those children who wants to understand what and why you are asking him to do something so that he can learn—not necessarily because he doesn’t want to do it.

Recently, the houseparents he has had for many years moved into the community (retired) and a new houseparent couple moved in. He has made this adjustment well which is an answer to prayer.

As with many children, S sometimes struggles to obey quickly and with a good attitude. This also shows up in school. His mom said that at times, he takes things that are not his so pray that he will understand his need to obey and to respect the belongings of other people. Please also pray that he will understand God’s word better and that God will open His eyes to understand the Gospel as his parents faithfully teach him.