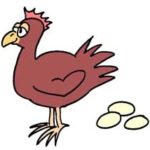 as well as having a venue for future skills-training.

We are busy trying out some names…The Bethesda Barnyard, Chicks for Children, Hens of Hope, Bethesda Broilers, The Layer’s Lair, Bethesda’s Egg-cellent Eggs, “Broilers-Up” (for our Purdue friends) – feel free to suggest some others.

The poultry project became a feasible option when we found someone who was willing to study how to manage and run a poultry farm. Alfred Msiza is our choice to manage this project and he grew up at Bethesda as his parents have been houseparents here for over 10 years. We have known Alfred for a long time and wanted him to tell the story of what he has learned in the process of planning and watching the poultry project come to life. (Bethesda) 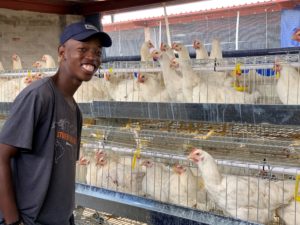 My name is Alfred Msiza, a son of Jack and Maria Msiza. I graduated from high school in 2017 and then went to Word of Life, South Africa, to study God’s Word for one year. At the end of my course at Word of Life, I wanted to further my studies and study something that was related to agriculture, more especially poultry farming. It was with great joy when I heard that Bethesda was planning on starting an agricultural project and they were looking into poultry production (raising chickens and/or eggs to sell) because I had already had the thought of being trained in that sector.

I went to do a short course in Poultry Production and Management at Buhle Farmer’s Academy in Mpumalanga. I can say that I realised then that there is a lot more involved in raising chickens than I expected. The course was great, and I was able to interact with many different people. I also had a chance to get rid of some of my fear of speaking to people because a business needs someone who is willing to speak to people they don’t know if they are hoping to reach their goals. At the end of the course, I graduated third place out of my entire class.

After working with the Bethesda team on the initial building plans for the project, construction of the chicken houses started. The buildings each have the capacity for 900 live chickens. With the help of Neil de Smidt, a skilled farmer and teacher, and different people, both from South Africa and from other countries, we were able to turn the project into a 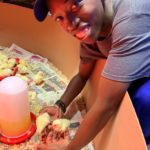 reality. Over the last few months, I have been getting people’s support and words of encouragement and I’ve had people telling me that they are praying for me and for the success of the project. That has been so helpful.

The Bethesda Chicken Project has now officially started operating as we received our first layer chickens on the 3rd of February, and our first batch of broiler chicks on the 11th of

February. The layers are Amber-link breed and the broilers are Cobb 500. The plan is that we will be producing eggs and broiler chickens for the market.

I will really appreciate your prayers that God will grant me the strength to keep up with the amount of work that the project brings my way and that He will also give the wisdom to make the correct choices for this project as there is a lot of hope and potential in it.