It is my privilege to introduce to you Bethesda’s new Executive Director. The board unanimously approved Rudi to take over the leadership of Bethesda from December, 2019. We wanted you to hear about Rudi from his own perspective. It has been my privilege to lead these last years and I look forward to remaining involved as I am able.   -Don Whipple (former Executive Director) 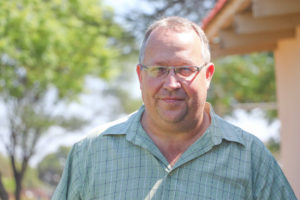 Ministries. I’ve been involved with Bethesda in one way or another for a long time, but I’ve been employed here for nearly 10 years.

I was born in Pretoria and as I like to say, “I’ve never had enough common sense to move away.” I was raised in a Christian home by parents who set a good example for my brothers and me. At the age of 14, I responded to an altar call at the church that we attended and committed my life to the Lord. However, as the years went by, I drifted further away from God and forgot the miracle of how He adopted me into His family.

By the time I was in in my mid-twenties, I was living a very secular life, and the only reason I still went to church was to spend time with my girlfriend, Michelle, who later became my wife. Although I was not actively pursuing God, He was not done with me. In December 2000, I attended an evening service at Central Baptist Church, Pretoria with Michelle and during the course of that service, God opened my eyes to the reality of my life and how it contradicted the life He wanted for me. I praise the Lord for that night and the fact that He pursued me with His love when I was doing my best to move away from Him.

Michelle and I married in 2003 and God blessed us with 2 beautiful daughters, Amy and Kelly. With Michelle and I both being accountants by vocation, you can probably imagine the exciting conversations we have at times. Thankfully, that did lead me to become involved with Bethesda.

Michelle had taken Bethesda on as a private client around 2007 and a few years later realised that the work required a fulltime book keeper. At that time I was working for an audit firm in Pretoria, so when the leadership of Bethesda offered me a position as Business manager, I thought it was a very exciting prospect. Boy, was I right! In the 10 years that I have worked at Bethesda, I can honestly say that no 2 days have been the same.

Looking back at the road that brought me to this point, I can only thank God for His love and mercy to me, my family, and to the family of Bethesda. I will cherish your prayers for wisdom as I lead Bethesda. Helping orphans and vulnerable children, and taking on the role of leading Bethesda to continue this important work is a daunting task; but, it is one in which I, along with the Bethesda staff, will come to know and depend on God more as a result.  To Him be all the glory.