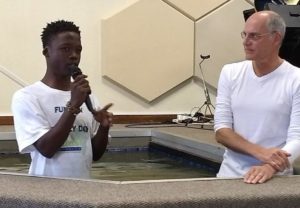 Lawrence Aphane, now twenty-two years old, was placed at Bethesda in the same month that he turned twelve. He had waited for five years for a permanent placement and as he reflected on his arrival at Bethesda, he recalls many thoughts and emotions including: fun, scared, welcome, safe, and much better than where he had been living. Of special note Lawrence said, “Owning my own clothing was special. You see, where I was staying before no one had their own things, including clothing. It was just whoever got to the washed clothes first.”

When Lawrence arrived he was placed into grade 4. He remembers that his greatest struggle was being able to read. He said, “I remember getting so angry whenever I was asked to read.”  He was encouraged to keep working and practicing both reading and math skills and over time, both Lawrence and his teachers began to see improvement. Eventually, Lawrence left Bethesda and went to the care of some relatives in November 2012.

No one at Bethesda had heard much from Lawrence until last October when we invited all the young adults that had ‘graduated’ from Bethesda to come back for a time of food, fellowship, and reconnecting with staff and board members. From then, there was a clear desire from Lawrence and Bethesda to re-establish a relationship and have regular communication so Bethesda could build into this young man’s life.

Soon after we reconnected, he reached out to some of his former teachers, Tonya Small and Heather Rumley, to see if he could attend church with them as he had not been going anywhere for a long time. He knew there had to be a significant change in his life, and while his family wanted him to go to their church, it does not preach the Gospel. From January, Lawrence began regularly attending Central Baptist Church of Pretoria.

One of the challenges Lawrence faces in the township where he lives, is the lack of work. Unemployment is over 50% in the rural areas and Lawrence, like so many others just out of high school, couldn’t find work. He was so excited when he got a call this last month to become a gardener at a local retirement community and he began immediately! Lawrence describes his excitement for the new job this way, “It is not by my strength or might but this only happened because of the Lord’s help.”  We have heard great reports from many people that Lawrence is doing an exceptional job and allowing Christ to shine bright in his life.

Lawrence has been growing in his faith and during the morning service on July 30th, Lawrence went public with his faith in Jesus Christ and obeyed the Lord in believer’s baptism. When asked why he wanted to be baptized he said, “Although, I knew I should be baptized a long time ago, I realized the need to let other people know I was serious about my faith.”

This has been a very quick overview of the last ten years of Lawrence’s life, and we are confident that God has so much more planned for him. Lawrence explained the role Bethesda has had in his life as, “A great opportunity to have clothing, education, and correction when I needed it. Living at Bethesda made my life easy and I’m thankful to God for being able to grow up there.”